Winter sun in The Philippines

I wonder what prompted you to read a post about finding perfect places for winter sun?

Maybe it’s the start of January and you’re looking for hot holiday ideas to get you through the month? Perhaps you’ve stumbled on this post in mid-March having suffered an entire English Winter? Or are you actually in Australia where the seasons I’ve just described are flipped on their heads?

Whatever the case it can’t be as depressing a day for you, future reader, as it is at the time of writing; New Year’s Day.

The dampest squib of a day is when I have chosen to imagine far-flung beaches – just as the world nurses a collective hangover worthy of 365 nights out, and searches for last of the Christmas chocolate in the back of the cupboard. Anyone for a chocolate button?

In 2018 New Year’s Day even falls on a Monday to make it just that little bit more miserable, and so I am burying my head in the sand quite literally, and dreaming of turquoise waters and white beaches, of $10 massages and drinks served in coconuts and of bright, hot sunshine. This is a list of my personal favourite beachy places to visit for sun-drenched holidays in the depths of the European Winter – I share them in the hope that both you and I will be visiting one – if not all – of these beaches in the coming year. Not together though, because let’s face it I don’t even know you. Loving Snooky (as Cambodia’s beach town is affectionately known) is not everyone’s point of view, but it is mine.

The beach resort also nicknamed Sin Ville is on my wishlist for some easy winter sun and I’ve visited a couple of times and always had a lot of fun. When I first visited Sihanoukville in the early 2000’s it was still a relatively sleepy backpacker town with a tiny smattering of luxury resorts but in recent years it has become Cambodia’s answer to the Thai beaches – not authentic, or unspoiled by any means, yet for me it has a special charm. Beer on the beach in Cambodia

Cambodia is one of the most wonderful countries you could possibly visit, and is small enough to explore extensively in a short time frame making it perfect for a winter holiday when you want to combine culture with warmth and relaxation.

Visit Kep and Kampot for seafood and pepper plantations, venture to Siem Reap for Khmer culture or take in Phnom Penh for a thriving metropolis with a tragic but important past – but also spend time chilling on the beaches and at the pools of Snooky in the sunshine. My Tip: It’s essential to stay away from the seedier areas in Sihanoukville and not be based at the beaches of Ochheuteal or Serendipity. Otres or Independence are cleaner and more laid back beaches and there are some really great restaurants and bars around town.

When I first decided to visit Mexico for myself I was living in British Columbia, Canada. Mexico represents a classic beach holiday destination for North Americans and most are fairly familiar with heading to Mexico for some winter sun.

As a Brit, Mexico will always feel like an exotic long haul destination so I spent quite a bit of time researching the differences between beach resorts in Mexico and I ended up staying between Playa Del Carmen and Tulum. I came to understand the distinction between the various resorts and attractions on this stretch of coast and learned that there are a lot of things to do on the Mayan Riviera beyond just lying on a beach.

There are plenty of lavish All Inclusive resorts from Cancun heading south to Tulum but I concluded that Puerto Morelos – which still has the feel of a fishing village rather than succumbing to over development – is the place I’d return to in a heartbeat. The sleepy small town atmosphere remains and as well as some boutique hotels and modest restaurants there’s a yoga centre and boat trips, yet the location is ideal if you want to explore the cenotes and Mayan ruins of the entire area but return to a relaxed base. My Tip: If I returned to the Mayan Riviera I’d hire a car. Driving down Highway 307, which stretches the length of the coast from Playa del Carmen and Tulum to Akumal and Puerto Morelos, is an easy, safe and accessible way to reach all of the destinations you might be willing to leave your sun lounger to see, and the freedom of having your own wheels is hard to beat. It really IS more fun in The Philippines

My own travels around The Philippines took place, as you can see by the pictures, at Christmas and New Year and I would heartily recommend any of The Philippines’ 7,641 islands for a winter holiday.

There are often cheap flights available to Manila and from there you can head to Boracay the nation’s undisputed party capital, which despite reports of over-tourism still has plenty to recommend it, provided you can cope with the idea of having a Starbucks in paradise. If that’s not your style venture north to the rice terraces of Banaue, try Palawan, probably the closest thing to paradise I’ve ever seen, or choose an even sleepier alternative – there are no shortage of options, and though journey times are long, the friendliness of the people make those 6 hour bus rides a pleasure.

The official slogan for The Philippines tourist board is It’s More Fun In The Philippines and I cannot overstate the extent to which I found this to be true – after my visit The Philippines immediately became one of my own favourite places for winter sun. To balance out this glowing report I must admit that after years of relatively incident-free travel, the island of Bohol is where I finally got food poisoning abroad. I was lucky to have a combination of good insurance and be travelling with friends so a few days of eating saltines and drinking gatorade and I was off to visit the chocolate hills as planned.

My Tip: Of all the places to which I’ve travelled The Philippines is the number one destination where I was happy to have a little freedom in my itinerary. Because the nation is made up of so many islands travelling often involves a combination of a coach and a ferry, meaning that missing your connection will almost certainly happen at least once. Because the country is so darn friendly it won’t matter a jot when you do though. Egypt makes the perfect winter sun destination for European travellers for a couple of simple reasons: it’s the shortest flight time (around 5 hours from the UK) to hit round sunshine and swimming, plus prices for flights and hotels are low, and packages are easy to pick up, even at the last minute. Throw in the fact that most people in the tourist industry in Egypt speak English and love welcoming Brits to their country and you have a winning combination. Trip to the pool anyone?

I have to confess now that I have Egyptian heritage, so I am a little biased  – but you just have to read some TripAdvisor forums to see that non-biased holidaymakers who have travelled to Egypt to escape cold winters in the past give glowing reports and are always counting the days until they can return.

You can either visit Egypt’s Red Sea Riviera  – the preferred destination for tourists during the period when Sharm was closed to European tourists – or head to the resort of Sharm El Sheikh itself which now offers exceptional value as hotels vie to get back the custom lost during those years.

Excursions to Bedouin camps and desert safaris as well as pyramids add to the world class diving and snorkeling on offer, which is guaranteed to beat the January blues.

• SUNDAY SECRET • I want to share a secret with you this Sunday. You’ve heard about the Pyramids of Giza? Well there are actually 120 Pyramids in Egypt and as well as the 3 most famous ones at Giza there are 2 more sets of equally spectacular pyramids just outside Cairo at Dahshur and Sakkara. If you visit either of these sites as I did last week, you’ll likely have vistas like this all to yourself, making the experience every bit as magical as you might imagine.

My Tip: In this case my tip is to tip. You get a lot of bang for your baksheesh in Egypt – tourism workers such as barmen and taxi drivers all earn incredibly low wages, and tipping is a real way of life. Spreading small tips around (anything from 50p upwards, now 10 Egyptian pounds) ensures you’re treated like a king, and as tourist numbers are down staff really go that extra mile for those who tip. I visited Sri Lanka on a winter sun escape some years ago, but I plan to visit again in the next few months, and so even though the teardrop-shaped island formerly known as Ceylon features last on my list in this post, it’s actually top of my wishlist when it comes to my own winter travels in 2018. I saw Sri Lanka shortly after the civil war ended back in 2009, and as with so many other destinations where tourism is either in its infancy or is trying to get on its feet again after a disaster, it was an incredibly rewarding trip.

In Sri Lanka I found quiet, peaceful and empty tourist sites, welcoming people and an atmosphere of hope for the future. Nearly a decade on my yearning to revisit Sri Lanka has intensified; I’ve made plans to return and looking through pictures has reminded me what a fabulous destination this is for winter travel. 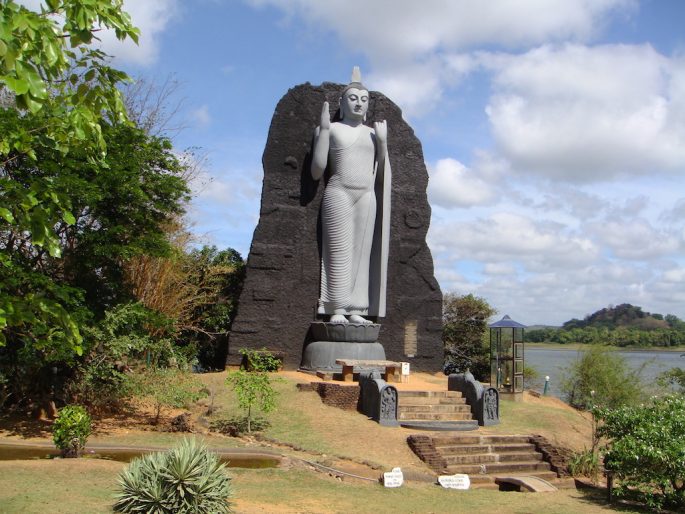 My Tip: A friend of mine has recently opened a small guesthouse at Midigama Beach called The West Coast Guest House, she is an exceptional host with great taste, so it won’t stay a secret for long. Of course there are many other places I haven’t mentioned which are pretty amazing for winter sun – I love Bali and in the Caribbean was there are plenty of options, but I was especially charmed by Tobago. And let’s not forget the USA; though land-locked various parts of the southern States such as Arizona are perfect places for winter sun holidays.