And I love all the bits in the middle. Here are some photos of those middle bits from my latest road trip through Arizona, California, Oregon and Washington… I recently joined my friend and fellow blogger Andrea Mueller for an epic 2,500 km drive from Phoenix, Arizona to Vancouver, B.C. via Joshua Tree national park, California’s Route 1 coast (including Big Sur) on to LA, San Francisco and on the home straight, through Oregon and Washington.

The highlight of our time in Phoenix was our afternoon at The Desert Botanical Gardens which was playing host to an atmospheric exhibition of sculpture by artist Dale Chihuly. Chihuly In The Garden

After waving adieu but not farewell to Phoenix, we hit the road  – and first stop just 3 hours east en route to Joshua Tree and Los Angeles was the General Patton Memorial Museum. We were too pressed for daylight driving time to actually check out the museum itself but anyone can have a gander at the collection of tanks and other war machines housed in the dusty exterior plot of the site for free. The penultimate destination that day for us was Joshua Tree National Park, which is the perfect stop on a drive from Phoenix to Los Angeles and was a bucket list destination for both of us, as well as our friends and travelling companions, and it turns out, a great place for fun photo opportunities. If you drive into the park around lunchtime en route from Arizona, there’s just enough time to tour some of the main natural wonders by car before dusk, including Skull Rock. We stayed on for sunset – and what a sunset it was. There were just a handful of others at Keyes View watching the sky turn blazing red and molten orange over the San Andreas fault, including a couple who’d brought a bottle of wine and two glasses and were the only ones committed to enjoying the sunset rather than photographing it. Sunset over the San Andreas fault

Next stop on our road trip was Los Angeles, where we were so busy having fun and hanging out with friends that I failed to photograph much other take a shot of a blustery and tacky Santa Monica Pier and an unusual sculpture that caught my eye. We’d already decided before leaving Los Angeles that if we were going to take on the drive to San Francisco in a day we’d do it via the scenic Route 1 coastal road that passes through some of California’s most celebrated sites.

But the thing about road trips is you need the weather to be on your side, and sadly it wasn’t. So what was in our heads at least a drive in the sunshine with blue skies above and blue ocean to our left, was more a drive with fog all around, but it made for some dramatic views, and with the tunes cranked up, fun times. 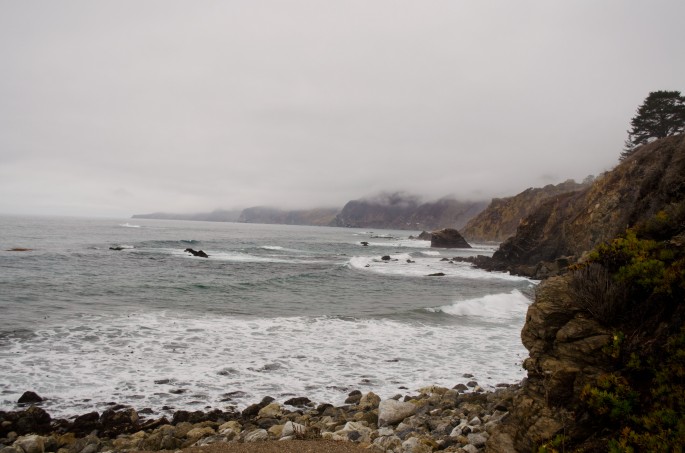 Of course the fog continued once we arrived in San Francisco, but nothing could dampen our spirits as we drove in convoy across the Golden Gate Bridge. This was the first time I’d visited San Francisco in well over a decade, and it felt great to be back. A foggy day on the Golden Gate Bridge

In keeping with the rest of the trip we avoided all the usual tourist sites in favour of meeting up with our travel industry mates and finding unusual activities, like the 16th Avenue Tiled Steps Project – a rainbow mosaic staircase in the middle of the city – and photographing street art: Best ATM I’ve seen in a while The streets of San Francisco are covered in great art After San Francisco was firmly in our rear view mirror the sky cleared and we drove for the next couple of days under a warming sun, and snapped some classic images of picture-postcard Northern California and Oregon farmland while speeding past. Finally as we came reached Seattle the rain came, and didn’t let up until we were at our destination. This signalled that it was time to swap the flip flops for boots, the sunglasses for scarves and the days (and in some cases nights) of car dwelling for a nice comfy bed again.

Sadly my iPhone was stolen right after this road trip meaning the shots I took with it are lost forever, so I’m glad I instagrammed a few images while I was on the road. If you’ve enjoyed these photos you might also like to check out Chief Driver Andrea’s fab 4-minute stop-motion video of the entire road trip (including the bonus bits I wasn’t there for like stunning Bryce Canyon in Idaho).