In Photos – A Day Trip To Brunei

I’d always wanted to visit The Sultanate of Brunei but somehow it had never happened – until circumstances brought me to the Brunei capital Bendar Seri Begawan on a great value Royal Brunei Airlines flight from Bangkok to London ‘via’ Brunei.

Of course it’s hardly on the way, in fact it’s just over two hours in the wrong direction, but I wasn’t going to argue with a free day trip to Brunei and a unique chance to explore this fascinating nation.

The flight change includes a full day and evening on the ground  – which is enough to get a good sense of the country’s pocket-sized city, and that included some amazing photo opportunities… The Sultan’s own private entrance to the Jame’Asr Hassanal Bolkiah Mosque, the largest Mosque in Brunei The shoe rack that accommodates up to 5,000 pairs of shoes for Friday prayers View of a mosque rising behind Kampong Ayer water village Entrance to the Royal Palace, we can’t see any of its 1700 rooms, alas A classic Brunei image of the Jame’Asr Hassanal Bolkiah Mosque Umbrellas used to shade the Sultan during his Jubilee ceremony, displayed at the Brunei Museum A fishermen works on his nets at the water village 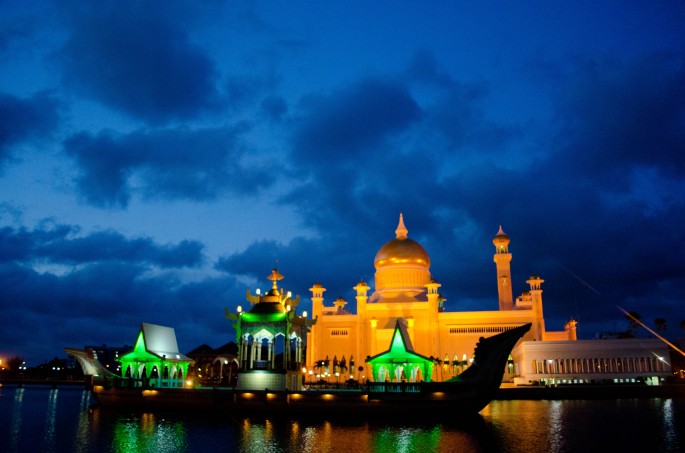 The transit tours are provided by Sunshine Tours Borneo, and SavoirThere just rocked up at the desk on arrival like any other customer and arranged and paid for her day tour on the spot –  and they couldn’t have been nicer to deal with. When they saw how many notes she was taking and what a genuinely nosey journo type she was they kindly invited her on the evening tour as their guest.