The laptop ban on flights is being extended. Ugh.

It was bad enough when I had to put my beloved Macbook Pro into my suitcase on a recent flight home from Cairo, but now even when flying between Europe and the US, we’ll probably all have to put our most prized possessions into the hold.

I already had a Tech 21 Macbook Pro Case when the laptop ban was first announced, which is lucky as the idea of throwing my Mac into a bag and sending it off unprotected on a conveyor belt would make me cringe…

When I travel, my Macbook Pro travels too – just like everyone else in the world you have to practically prize my laptop from my hand to get me to part with it.

In fact, my Mac is the single most expensive thing I own (it cost more than my current car. Yikes).

So I knew I needed a good case for my most treasured Apple possession and I decided to test out one by Tech 21.

Little did I know that on my first trip the new case would be tested to its full – by being flung around in Egypt by baggage handlers before being spat out on the belt at Heathrow, unscathed.

This is what I think of the Tech 21 Macbook Pro case – I talk about the Impact Snap Case for Macbook Pro which is what I use, and I got the matching Iphone 6 Evo Elite protective case too so you can scroll down for info on that. When I first bought my Macbook Pro Retina 15″ (after drooling over it in Best Buy for so long that I was on first name terms with all the sales assistants) I naturally treated it like it was made of rare 18th Century lace.

No liquids near the Mac. No eating while typing (combined with my hummus and crisps addiction, that phase did not last long).

But I knew I would get sloppy and scratch, knock or drop it sooner or later so decided it was essential to buy a case for my most treasured possession.

But failure to do my research properly (I just ordered a cheap case online one day from Groupon) didn’t work out so well, and I ended up with a flimsy case which was more likely to damage my Macbook Pro than protect it. When British case specialist Tech 21 asked me to test out their cases for Mac and iphone, I took one look at their slick products and website, and thought it was perfect timing.

I wasn’t up for any more substandard laptop cases and I wanted my Mac and iPhone to be bulletproof, yet still look like they were straight out of an instagram photo, shot from above on a marble or rustic wood backdrop (no ugly Otterbox for me thanks). 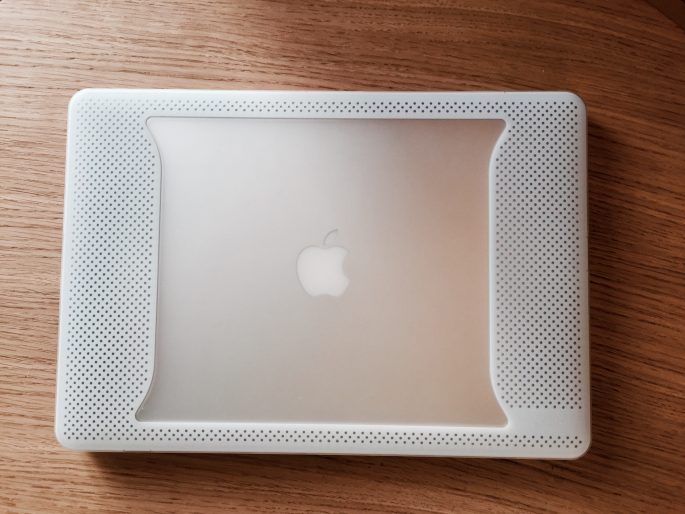 I have to admit I hadn’t heard of the brand name Tech 21 then, let alone read a Tech 21 review, but once I did my due diligence I realised the company started life on Dragon’s Den getting investment from Peter Jones and Theo Paphitis, and I noticed they sell through Apple stores and in John Lewis – and once I know Lewis’ sell something, I’m totally reassured. I am very British like that. In fact when the cases arrived I fell in love with them a little bit and decided to do something which I’ve never done before – and after watching these videos, you’ll realise why. I made a review video.

Nobody actually asked me to, I just thought the quality of Tech 21 Macbook Pro case compared to the no name case was so different I decided it should be documented. Maybe I am a secret Youtuber after all. (I’m so not).

I won’t be watching these again, because there’s a reason I don’t do video (‘I have a surprisingly nasal voice’ is just one reason) but I urge you to watch if you want to find out what Tech 21 cases are like compared to cheaper options.

Before – The No Brand Macbook Pro Case:

Cheap Macbook Pro Case from Savoir There on Vimeo.

After – The Tech 21 Macbook Pro Case: There are a lot of accessories and bells and whistles you can be suckered into parting with cash for when you own a nice Mac or iPhone. I have honestly tried to avoid being bogged down in too much unnecessary expenditure on ‘stuff’ for my Apple products, so I’m definitely not someone who is always looking for the next thing to bolt onto my Mac or phone. Drop proof, scratch resistant case – I have a ‘Ghost Armour’ screen protector so this case protects everything I need it to.

I also thought that the £30 range was enough to spend on a Macbook case until I used a £30 case for a few months and realised that you get what you pay for.

As someone who watched a hard drive fall on the floor in a Starbucks once, losing thousands of photos in a split second, one thing I learned to take seriously was hardware protection. I look at it like buying insurance.

I immediately bought a drop-proof hard drive after the Starbucks incident, in the same way that someone who has been robbed goes out and buys insurance, vowing that I wouldn’t get caught out again.

But I honestly should have invested in a top of the range case for my phone and my laptop right then and there, because lightning is more likely to strike in a slightly different place the second time. I travelled ONCE shorthaul with my Macbook without any case – and even though I was super careful, I wasn’t careful enough during that frenzied bit where you have to throw your laptop into a plastic bucket with all your sharp metal objects, a bunch of liquids and a pair of dirty winter boots. All while a bunch of angry people jostle behind you and under the watchful eye of a glaring security guard.

My Mac came out the other side with a big scratch on it and I was not happy. So I am lucky that I was given I got a case for my Macbook Pro before my hand was forced by another dropping incident and before the initial laptop ban was announced.

The Products I Use:

Now I have this case, I can honestly say I would part with the cash for it in a heartbeat. The Macbook Pro Impact Snap Case costs £59.95 which I might have winced at just slightly before using it, but the website talks about it having ‘refinement you can feel’ which sounds like a meaningless marketing statement until you actually feel it. I won’t be downgrading anytime soon.

Prior to this case I was using a nice leather wallet style case for my iPhone but I kept putting off doing something about the fact that it wasn’t compatible with using my phone as SatNav in my car . I had to take it out of the case to clip it into the satnav holder and then I’d end up with the case rolling around in the footwell.

The nice thing about the Evo Elite is that is is not bulky but it is sturdy and I can wedge it into the SatNav holder and yank it back out again (I’ve been doing this for about 3 months now) and the case seems to survive unscathed.

Tech 21 supplied both cases for review purposes but all opinions are 100% genuine and honest.