The New Battle of Hastings: The Jerwood Gallery

The new Jerwood Gallery in Hastings

A shiny new and exciting modern art gallery surrounded on all sides by signs and graffiti deploring its very existence? Who knew a gallery could cause such a furore? See what all the fuss is about and take in the East Sussex sea air with a visit to Hastings’ Jerwood Gallery.

I’m going to do something I don’t usually do here and just tell you what I personally thought and felt about a place. Not because you should really care what I think about East Sussex’s latest artistic venture, but because talking about the new Jerwood gallery, which is being mentioned in the same hushed tones as the De La Warr Pavilion in Bexhill and Margate’s Turner Contemporary, is all about personal perspective and seems to involve taking sides – either for or against the gallery’s presence.

At first I thought I knew which side I was on: a new modern art gallery opens up in a British seaside town with a historic past, a quirky and artistic reputation, but an uncertain future, in need of regeneration and hardly first in the queue for investment. It seems like a positive step to me. Hastings’ George Street has a mix of quirky and artistic shops

I’ll declare here that I have a real soft spot for Hastings as a DFL (a ‘down from London’ weekend visitor) having enjoyed its traditional Sunday pastimes over the years; fish and chips on the shingle beach, blustery walks on the hill above town and afternoon tea and antique shop trawling in Hastings’ old town where George Street’s quirky  shops always entertain me, so I was happy to add yet another reason to visit to the list. Hastings: go for the art, stay for the Fish and Chips

But it turned out that the only thing that’s black and white when it comes to the Jerwood is its shiny black façade of hand-glazed tiles and its stark white interior, punctuated by modern British art from the Jerwood’s permanent collection of 200 paintings. 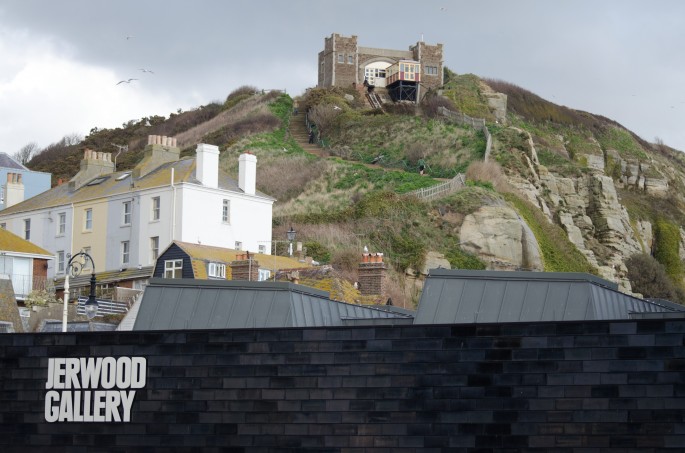 The local news was awash with vox pops from local residents and business owners, genuinely split by the decision to open a £4million modern art gallery, charging £7 a pop (though just £2 for Hastings residents and free once a month) in a town with some serious poverty, and an already well-established artistic community who require funding for their existing projects.

And a quick glance at the Jerwood No Campaign website educated me further about the local politics – the location of the gallery on what’s called The Stade, (an old Saxon word meaning beach) the area where the town meets the sea and where the fishermen are still based, being the main bone of contention. More traditional skills are at work on the Stade in Hastings

The Stade was also home to the town’s income-producing coach park, now moved on to make way for a slightly different type of tourist, the type who is drawn as I am to exciting architecture and contemporary art.

And it seems to be working – on opening weekend I found Hastings buzzing with more activity than I’d ever encountered. More proof that the gallery was a positive addition to the town, bringing in tourism, attention and more importantly, income. But on the short walk from the town car park to the gallery all the excited day-trippers including myself passed signs and graffiti vehemently opposing the creation of the Jerwood and I had to wonder how successful a project can be deemed when it is the subject of this much opposition. Hastings was packed on the gallery’s opening weekend

Once inside, I found myself torn between concentrating on the art and being distracted by the written protests encircling the gallery, which were visible through and framed by the Jerwood’s large sections of glazed walls. Those opposed to the gallery made their feelings clear

Being inside the gallery on opening weekend was like being under a silent siege. I don’t know whether it was my imagination but I could have sworn there was a ‘them and us’ energy in the air – within the gallery itself the staff and visitors were cheerful and friendly and I felt comfortable and welcomed, but I distinctly remember feeling I should fold up my Jerwood gallery gift shop bag and place it inside my handbag after leaving, rather than court controversy by toting it around town for the rest of the day, like a banker wielding his bonus cheque in the middle of an Occupy protest camp. The fishing industry as seen from inside the Jerwood

It’s easy to forget in all this fuss that I was there to look at the art. The opening exhibition on the ground floor of work by Kent artist Rose Wylie runs until July 2012 and has created a great deal of attention around the 77-year-old, who has even been termed ‘up and coming’. The work really suited its environment and was well showcased by the Jerwood’s airy light and open ground floor space.

On the first floor more traditional work by L.S. Lowry and Duncan Grant amongst other British artists is on display, and was being viewed eagerly by a good cross-section of young and old on my visit. The Bather by Christopher Wood, one of the Jerwood’s permanent collection

My lifelong search for the exotic seen through the eyes of a Londoner was rewarded with An Afghan Gentleman by Walter Richard Sickert, my favourite artist by far in the permanent collection and once a Camden Town resident like myself.

And this is the key to my opinion of the new Jerwood Gallery: Of course I like it, I’m from London and it’s nothing if not a little bit of London, beautifully situated at the seaside. In fact it comes as no surprise to learn that the Jerwood organisation have a London space too.

So I’d say go to Hastings and see for yourself; the town is well worth a visit, you can enjoy the gallery and all that the area has to offer and make up your own mind rather than listen to mine or anyone else’s opinion.

There is also an onsite Café upstairs with seating inside and out, overlooking the sea.

Big Boys Sit in the Front, a retrospective of Rose Wylie’s work runs on until Sunday 1 July 2012. How To Walk Across London Bridge – Without Setting Foot In Blighty