5 Reasons I Prefer To Travel In A Pre-loved Car

Today the sun came out in England. Yes, for the first time this year it really feels like summer is coming. And I suddenly remembered I have a sunroof.

It felt so freeing to be driving along a country lane with my tunes blaring and, for the first time since buying this car I was able to use the sunroof to let in the warm spring air. I can’t wait to take it on a trip through the Channel Tunnel too. I can’t wait to take Holly shopping in France (Holly is my car!)

I love my car and I kind of love driving it. Just six months ago I didn’t think I’d ever be able to write a sentence like that again. That’s because I was in a car accident, a fairly minor one, thankfully, but it left me shaken up and with whiplash, and my car was a write off.

The last 4 cars I’ve driven have been older ‘pre-loved’ Honda Civics  – all from the early 2000’s. They may not be the flashest cars in the world and they may not have a load of computer-powered bells and whistles that practically drive the car for you, but I’ve found through experience that driving an older reliable model of car has a lot of benefits, and it’s something I’m really passionate about, especially since being in an RTA when the sturdiness of the car really counted.

Like a lot of Londoners I didn’t start driving until a bit later in life; when you have hundreds of buses, tubes, trains, taxis and ubers on hand day and night, owning a car isn’t such a big priority. My prefered mode of transport in London is always public transport

Once I moved to Canada where having a car was essential, the first car I drove regularly was a Honda Civic, and an old one at that. This car was like a go kart, it was an automatic and so easy to drive, with incredible visibility and hardly any of the confusing controls and options most modern cars have. I was surprised to find that all the anxiety I had about driving in London vanished. By removing a few of the unnecessarily confusing options driving became more fun. This modern Honda Civic was a nice drive, but I still prefer my older car

Now I can really see why car manufacturers try to encourage driving instructors to use their vehicles, because once you get used to a car it’s so easy to just buy the same one again, and that’s what I’ve done with Civics. I’ve always ended up getting a model that’s year or two newer than the one before. But, and it’s a big but, so far I haven’t been tempted to buy a brand new car even though I did test drive a new Civic and really liked it, and there’s a few reasons I’m happier to go on my travels in an older car.

5 Reasons I Prefer to Travel in a Pre-loved car

Everyone knows that as soon as you drive a new car off the forecourt you lose up to 40% of your money instantly. I’d have to be seriously wealthy to be ok with that kind of waste of cash – especially when I put it into perspective by figuring out how many holidays the money would pay for. I distinctly remember how much work went into hiring this car in Iceland!

Obviously every car has its own unique safety features, and everyone should do their due diligence on car safety ratings before they buy, but I feel safer in a sturdier older car.

When my Civic was being towed away I asked the tow truck driver who sees situations like this every day what cars he see crumpled to nothing and what cars come away unscathed. Unsurprisingly he mentioned that Volvos live up to their ultra-safe reputation due to their roll bar frame  – and after that I went and started looking at used Volvos pretty quickly.

This might just be me, but I’ve hired quite a few brand new state-of-the-art cars, and I find that most of the extra features and flashing lights and alerts just serve to confuse and distract me, and get on my nerves. I find a more straightforward car easier to drive and more relaxing.

I once hired a Hyundai Tucson and it had a setting where it beeped when you went too close to the white lines – I felt like I was constantly being told off. I also hired a Fiat 500 which I was ready to fall in love with, and couldn’t get the satnav to sync with my phone, or the radio to stop blaring in Italian! Me with my Canadian pre-loved car

When you have a pre-loved car rather than a shiny new car which is completely pristine, you don’t worry quite as much about someone dinging it in a parking lot, getting some mud on the carpet or clocking up a few extra miles. Don’t get me wrong I keep my car in great condition and I would not be pleased if someone dented it, but knowing I can replace it for a reasonable sum rather than have to take out a second mortgage if it’s damaged keeps me a lot calmer.

I like the way older cars look. I think if I did have a lot of money to spend on another car I’d be more likely to get a stylish classic or retro car than a brand new vehicle that just looks like everything else out there. I like my car to have some personality and some history.

Just like people some cars age really well. some used cars, like my Civic, which had barely 45k on the clock when I bought it, have got plenty of life left in them. This brings me onto another really good reason that I like a pre-owned car – I dislike waste.

Modern society can be incredibly wasteful and we live in a disposable culture which sees a lot of people throwing things away which are perfectly ok to keep on using. 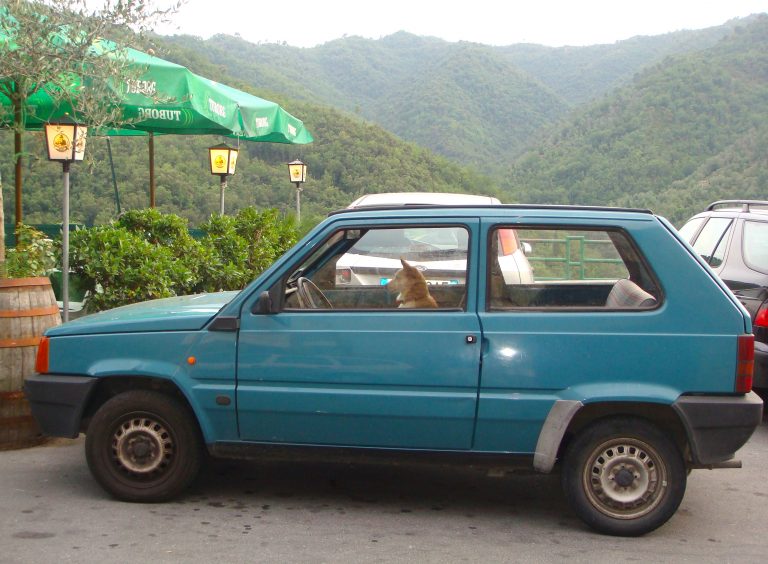 Older cars are so cute, especially ones that come with a dog driver

I have spoken to friends and found that many of them only buy new cars because they are frightened of making a mistake when buying a second-hand car, or being taken for a ride quite literally. I’ve found that it really isn’t too difficult to find a reputable used car dealer – for the south east KAP Motor Group is a reliable option – or find a private sale and use your gut instincts about the seller. I’ve tried it both ways and each time got a fantastic car for a bargain price.

When you look at what throwing something ‘away’ really means for the planet, you look at buying used cars in a different way. When it comes to the energy it takes to destroy an older car, and the energy it takes to manufacture a new one, that adds up to a lot of waste, and a big drain on the environment. I’m glad up-cycling and re-using is trend now, and I’m happy to be on trend with my own pre-loved car.

KAP Motor Group asked me to share my thoughts in this post on why I buy pre-owned cars, but all the opinions expressed are my own.

Pidurangala Rock At Sunrise: 5 Reasons To Choose It Over Sigiriya The 5 Simple Reasons I Love Belgium (& You Should Too)